Brentford have a long and distinguished history in West London.  Once in the top league, they have been through many difficult times but more recently seen huge progression upwards through League 2, League 1 and now a consistent top half finisher in the Championship – in 2015 we made a serious challenge to get to The Premier League by reaching the Championship play offs.

This progression includes a new stadium.  Whilst longer in the planning than construction it is well under way and they will play the 2020/2021 there.

This is our last season at Griffin Park for which there is huge fondness amongst many fans.  I was commissioned to do three paintings to be sold as prints....and another individual one.  These along with my sketches during the season can be seen here.

BFC and their development partner EchoWorld London arranged access but being a major construction project naturally could only be limited to the safe route edge of the site initially but then only from the public roads around.  I hope supporters will enjoy my artist-eye view of the journey towards our new era at Lionel Road.
​

Click on individual images to enlarge and view full screen. 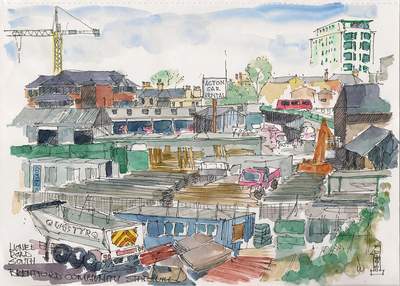 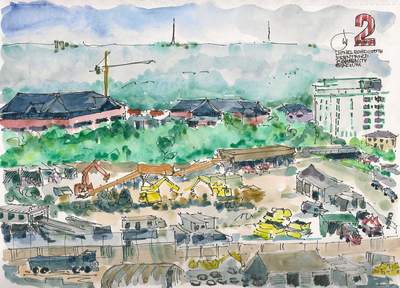 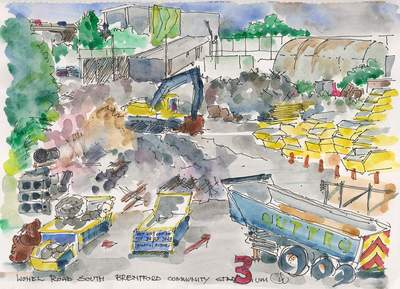 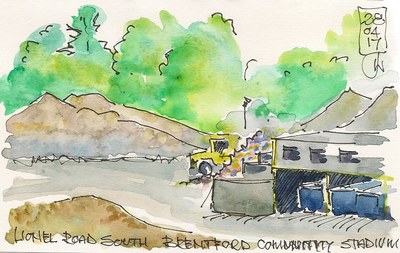 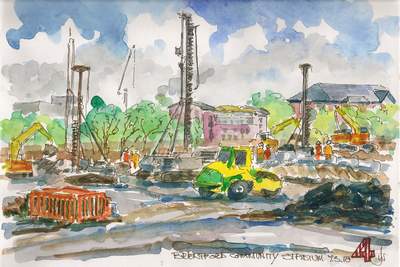 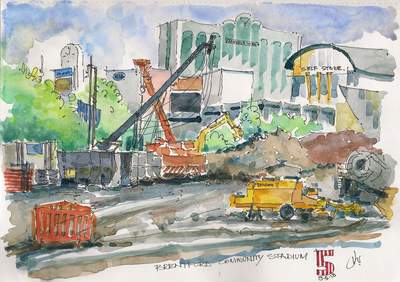 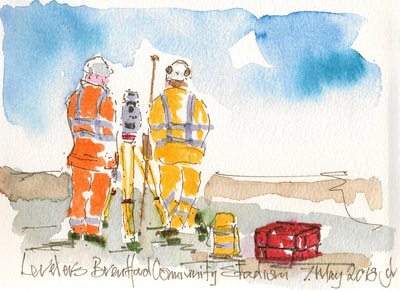 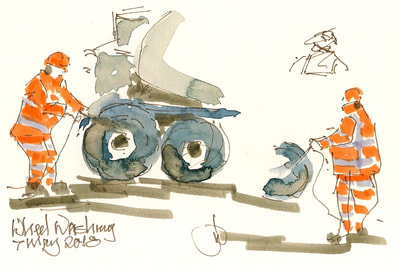 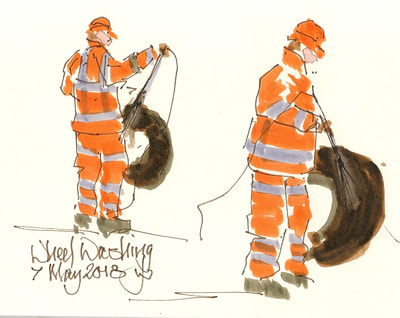 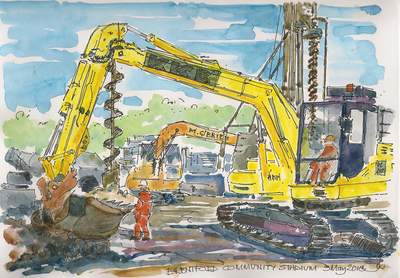 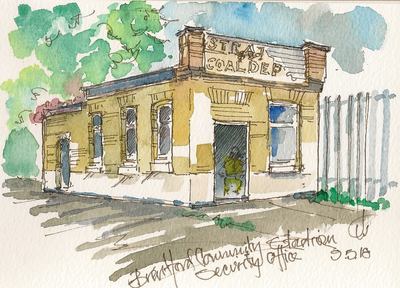 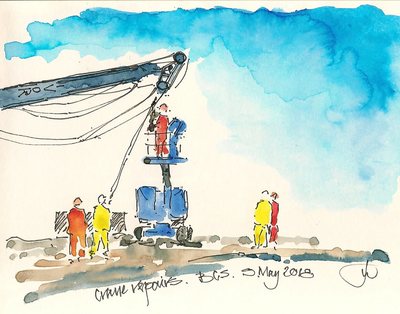 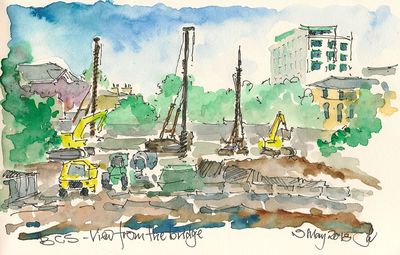 SERVICE CONNECTIONS & LIFT SHAFT
August 2018
​
It's been nearly two months but continuous pile boring can get - well - boring.  There's only so much even a dedicated sketcher can do to make drilling rigs and pumped concrete varied or more interesting.  The key people at the Club have given me access to the dedicated web cam which means I can see when something new starts.

It did.  So along I went to record the closure of Lionel Road South for excavation and services connections.  Also a huge bright green crane lifting massive pre-cast concrete sections of the stadium lift shaft into place.

Helpfully the cherry picker for the man who guides and bolts each into position is bright blue.  The mini pneumatic drill and trench digger is yellow and orange so a colourful day.

​I'm waiting for plant in Cherry and White stripes .... probably in vain.  But a 5 - 1 Home, first match of the season win is plenty compensation! 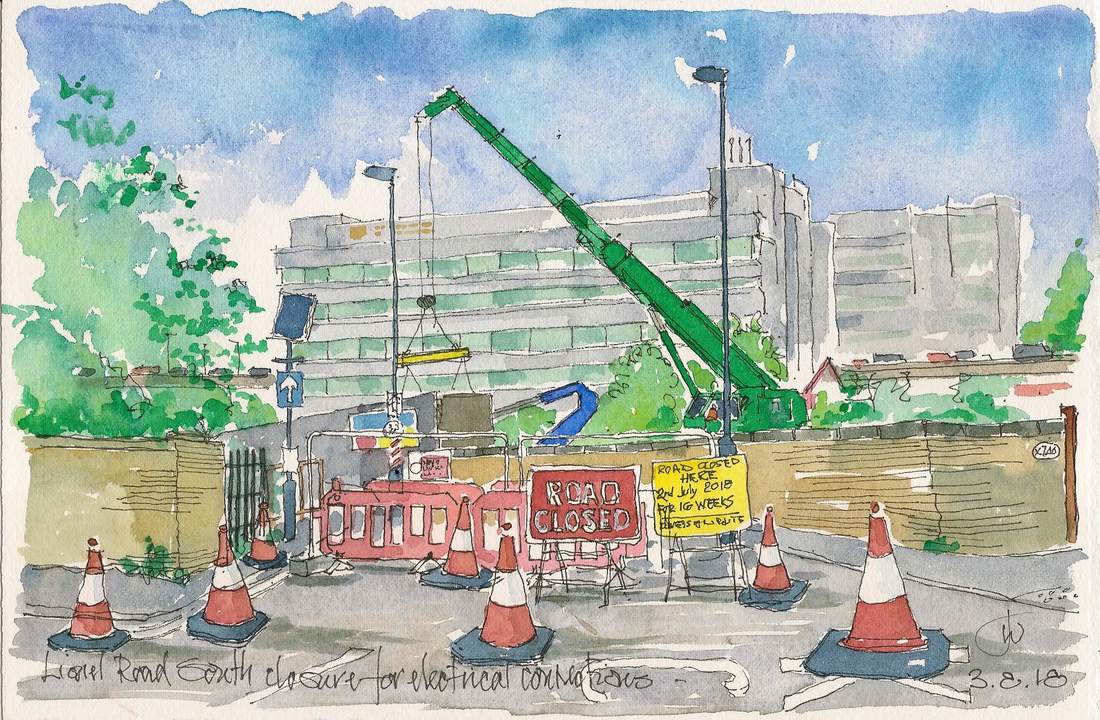 This is a great sight - the start of the steel frame for our new stadium.  Raked steel angles for seating and the first pre-cast planks.  It all becomes visible and will be increasingly so pretty quickly.  Quite complex but it galvanised me into doing three. The view from the South Circular Road Bridge with the sweep of the railway is particularly striking and row of 'Red Cards' next to a deep pit - presumably for visiting team's offenders! 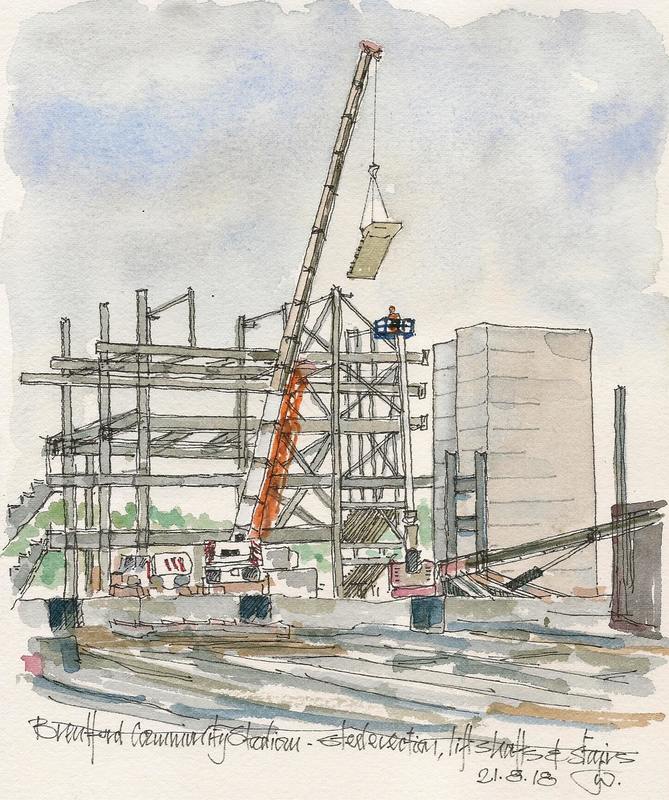 The steel frame, lift shafts and terracing is now all there for the South Stand so work has started on the two side stands.  A couple of bays and some pre-cast terracing each side.  As they are formed the reality of a new football stadium will emerge.

The closeness of the corner to Lionel Road South stands out - big time! Lots to draw especially the artist's old favourite of into the sun (contre jour) to get strong lines, contrast and shadows.
The view of the South Stand above the Cider & Ale House and old Station building (now a fantastic café) is impressive.  Demanding a return visit to sketch it... 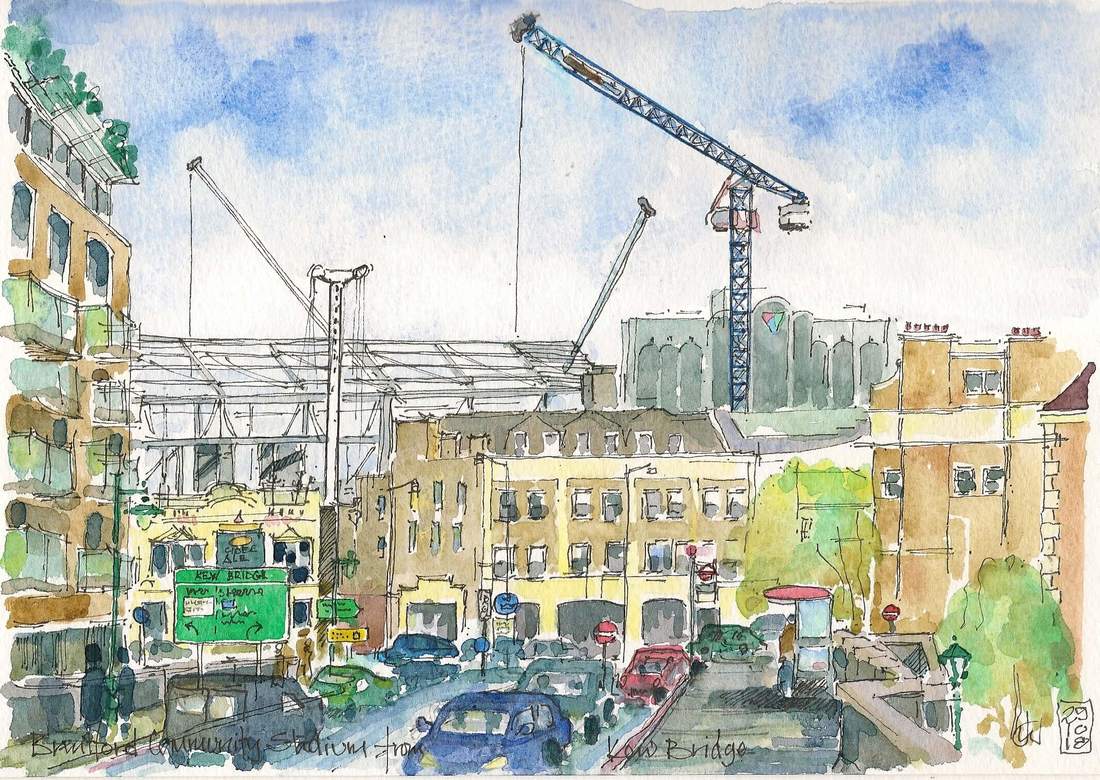 It's all looking more and more like a football stadium!  Although not complete the steel work and terracing pre-cast concrete slabs are in place for three sides.  The difficulty is getting a viewpoint far enough away to capture the atmosphere of enclosure. So its the railway bridge from where the roof of the west stand tends to merge with that of the south.

Artist's licence with the tones and colours or the freedom of paint to the rescue... 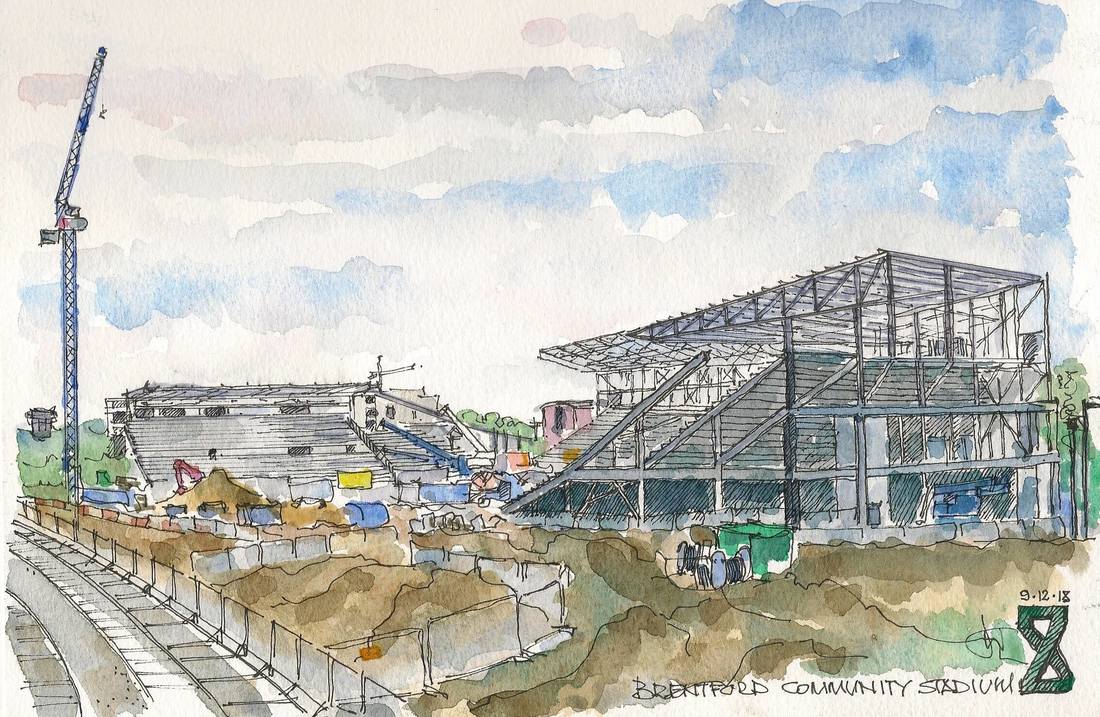 ...and the players will get in.

For entirely valid reasons access onto the site is not available so my sketched record of progress has to be from odd vantage points and angles.  But this can generate or reveal aspects that otherwise could be missed doing just the obvious.

​In the case of my two visits this month it is a theme of access, fans, players, materials by crane and gas via a very big. long pipe. 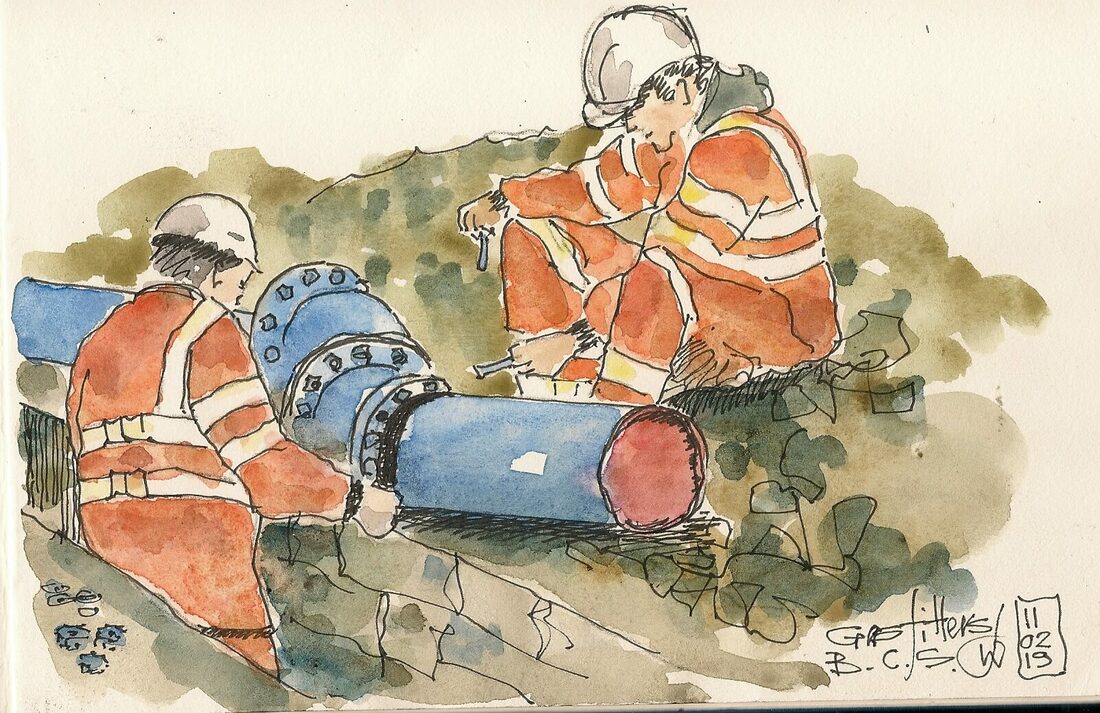 While eventually for fans there is Kew Bridge Station, a new bridge over another branch of the railway and for players their 'Tunnel'
THE FOURTH SIDE/NORTH STAND
March 2019

The building has looked like an emerging football stadium for some time but with the start of the fourth side, The North Stand it really is becoming a complete ground.  So far it's only the first few bays but finishing the other bays fully enclosing the pitch will be a big milestone.

That its pitch emphasised by what I take to be a mound of pristine red/brown topsoil in the centre - ready for the turf.

Lots of other activity, fixing the roof sheeting (we'll be dry) and digging holes for posts for more hoardings all being part of the hectic activity. And with the constant beeping of vehicles manoeuvring it sounds busy too.

Add to that the unmistakable throb of the twin rotors of a pair of Chinook helicopters overhead it was quite a noisy day. 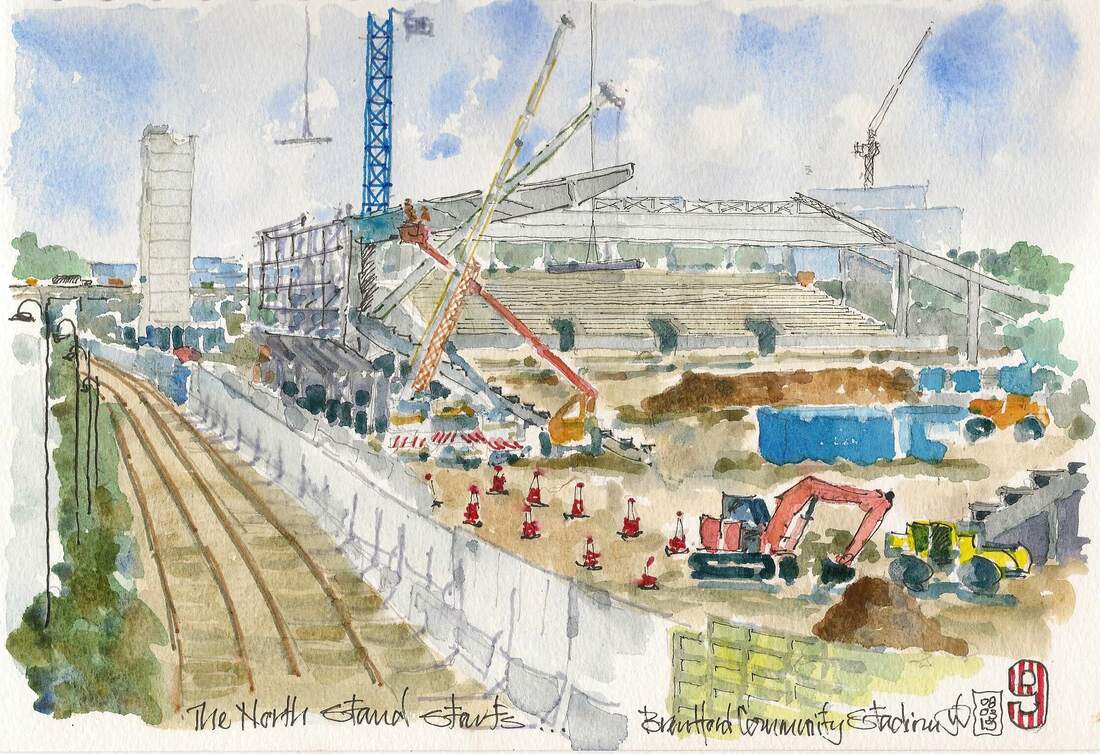 ​It is hard to appreciate it is 2 years since my first sketch.  I've numbered the main stages, so here we are at number 10.  All 4 sides/stands are there and the final corner's steelwork nearly complete.  Cladding is well underway so the remarkably strident angles of the design are beginning to make an impact.  This going to be one impressive and strikingly different Stadium. 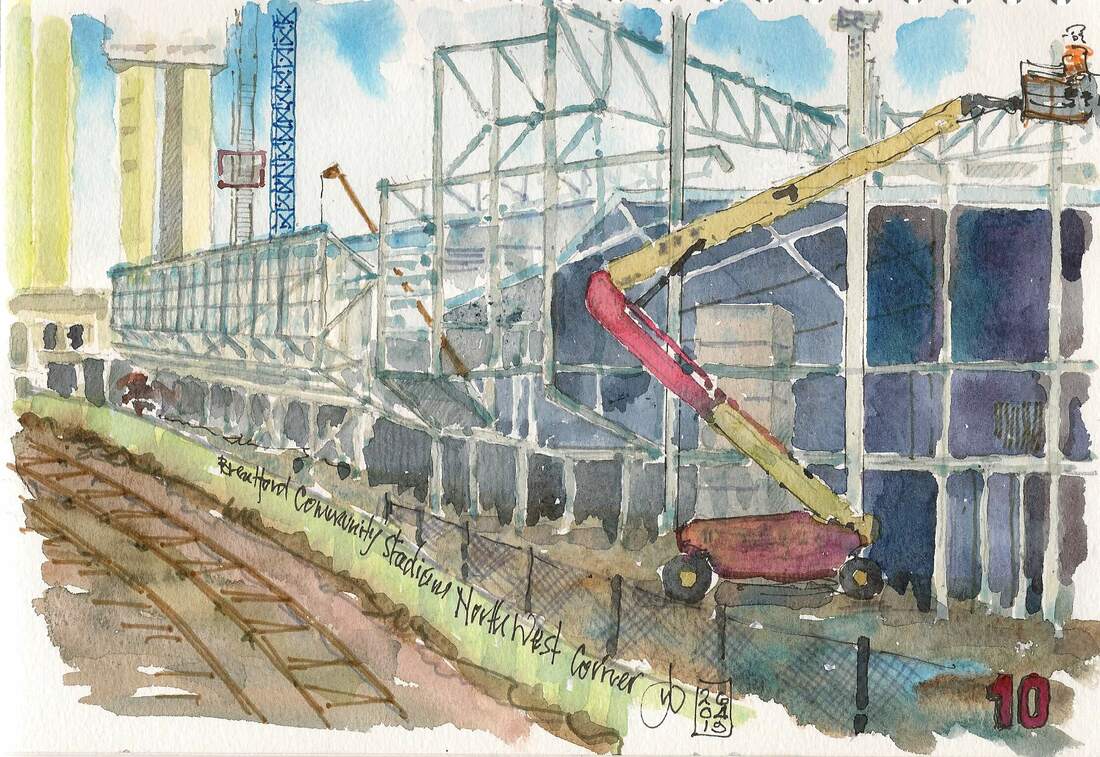 LIGHT GANTRIES AND A PITCH
June 2019

After the main part of the stadium structure come important details.  The steel work for the floodlights - looking like strange skeletal creatures - and the turf laying specialists are in action.  And seemingly on every surface signs naming the project, the club, the contractor  - even posters advertising the new seasons strip. 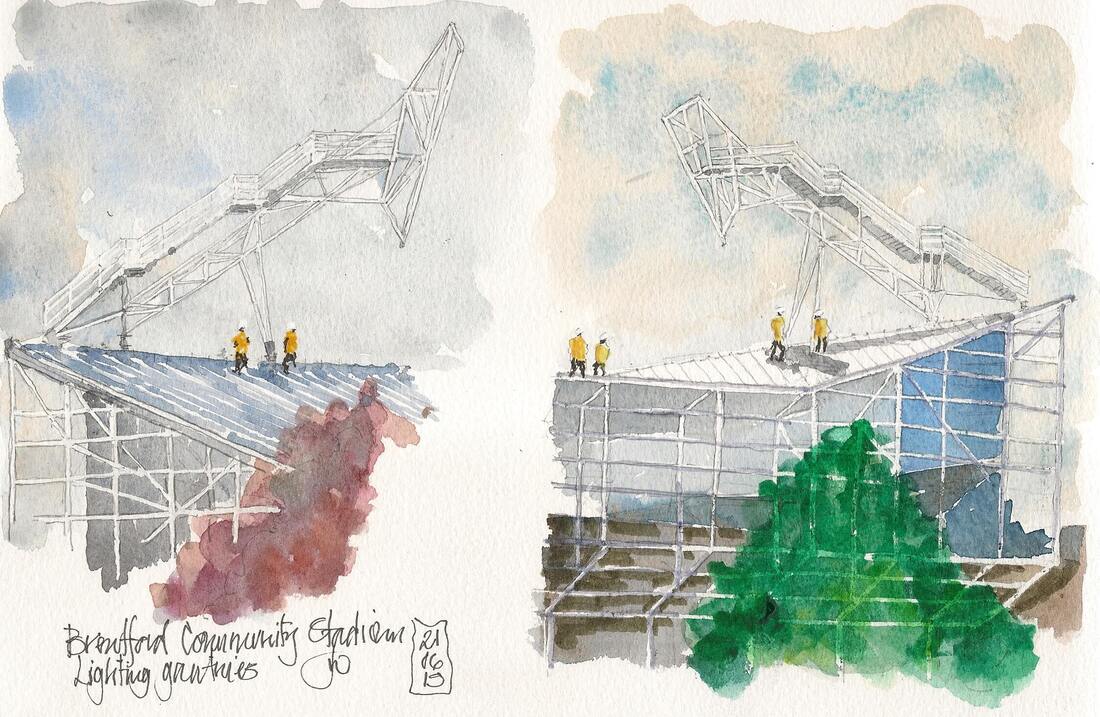 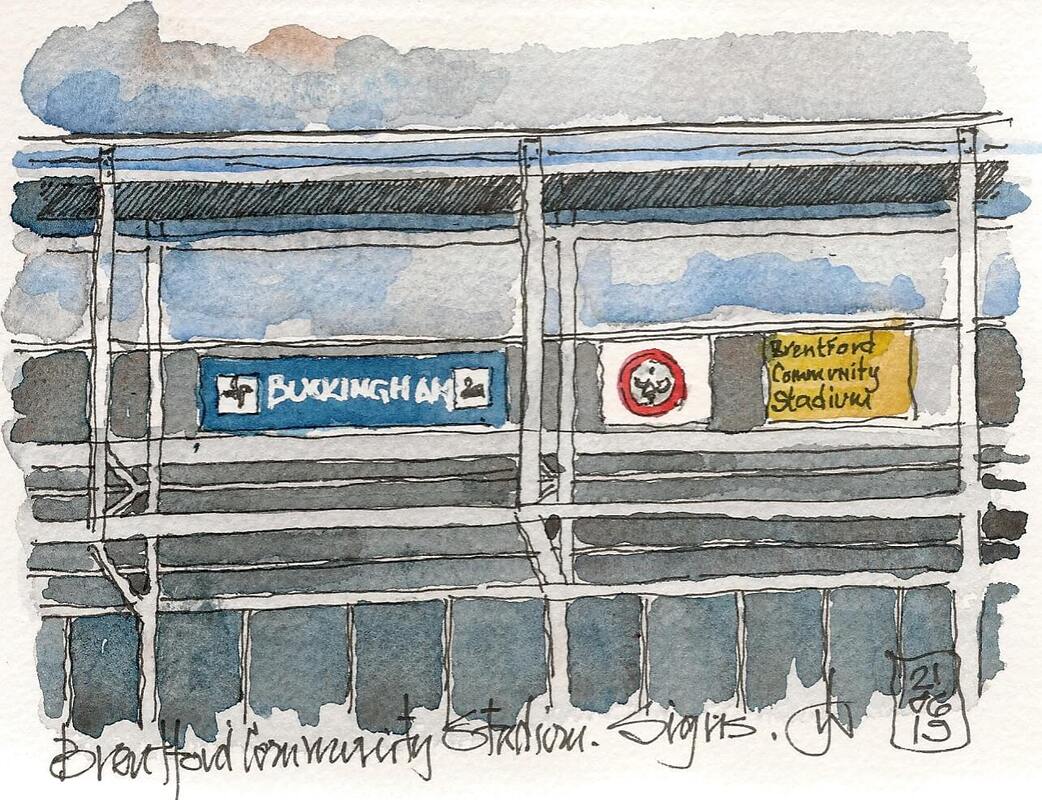 GRIFFIN PARK LIMITED EDITIONS (on sale in the Club Shop) AND A FEW SKETCHES
August 2019
​
This is our last season at Griffin Park. Hearing that I was sketching away there they commissioned three larger sketches/paintings for limited edition prints for fans...here they are. 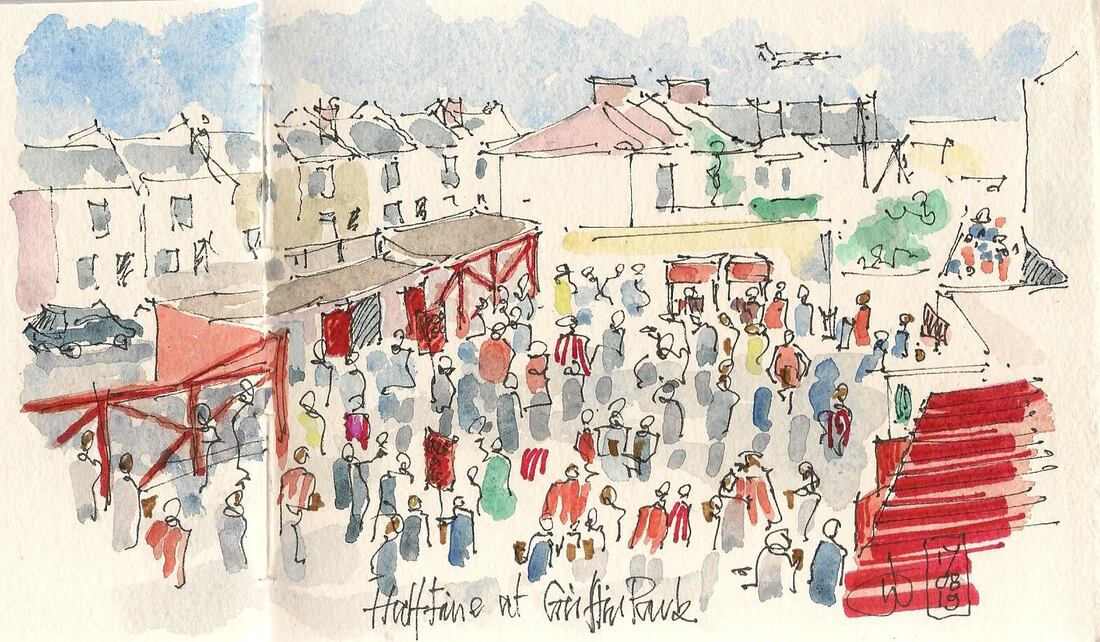 ​The site is now totally surrounded with solid hoardings so getting views is not easy.  Here's a couple of 'Glimpses' of the club colour red starting and into the green turf and multicoloured seating.
Nearly There
April 2019

​We're almost there - in both meanings.  The contractor is nearly finished, final approach paving being laid.  Test events are scheduled.  Its time for a panoramic view from the roof outside The Club's new offices on the top floor of the block to the north.  Then a set of quick fire sketches at the two test events to capture the finished product. But now LOCKDOWN. 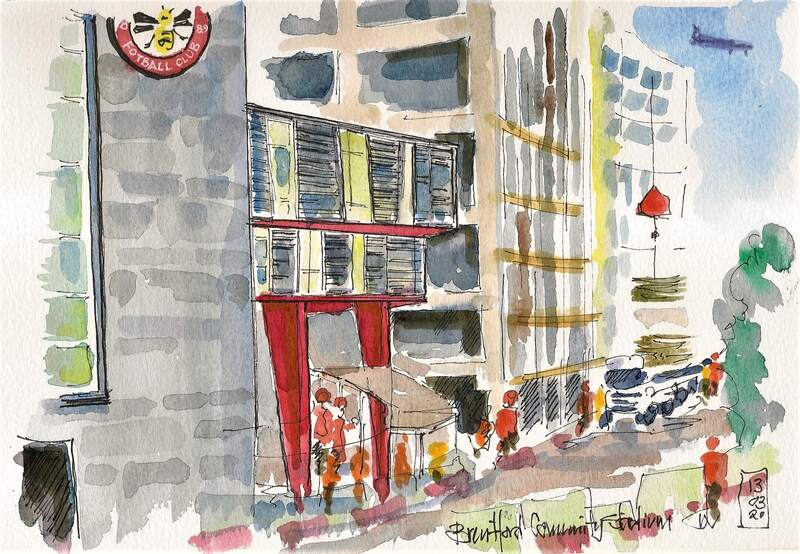 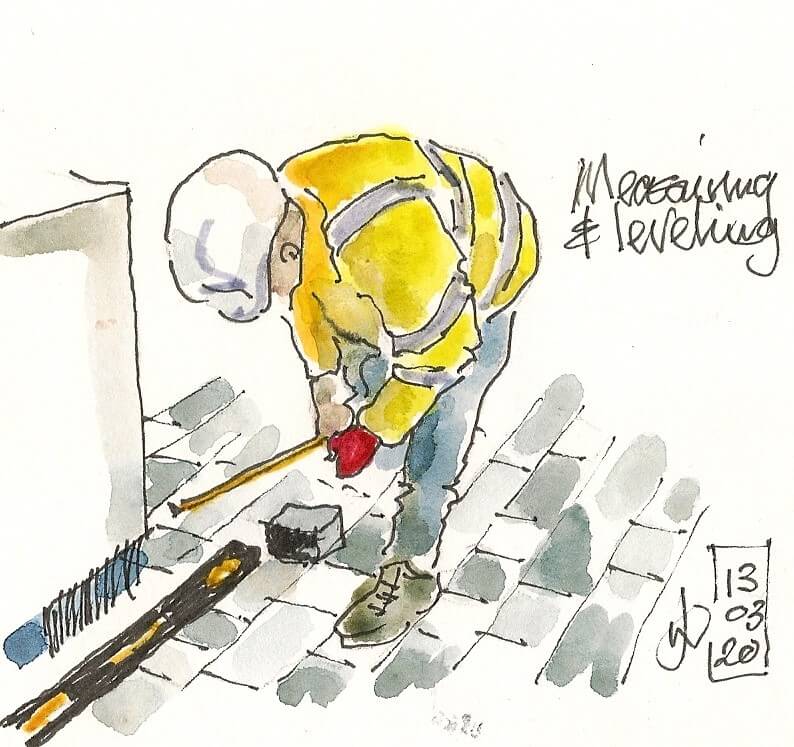